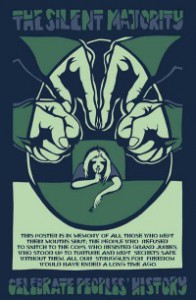 (Post Script, April 2015:  It has come to our attention at The Final Straw, and within the wider North American Anarchist scene, that Steve Jablonski’s story of evasion of a Grand Jury in the PNW was a false one.  It’s regrettable that someone would choose to gain social and economic capital by posing themselves as bravely resisting the state and it’s harassment.  As has been verified to us here at the show, Steve not only lied on this show, but in tons of personal interactions in the U.S. and Canada and took advantage of good intentions and trust while also soaking up resources that could have been used to support others actually resisting Grand Juries and otherwise experiencing State repression.  The audio of this episode has been removed.  For further clarification: http://anarchistnews.org/content/regarding-steven-jablonskis-deceptions-grand-juries-and-sensible-solidarity)

This week’s show features a conversation with Steve Jablonski, recently returned from a period of self-imposed exile in Canada as avoidance of receiving a Federal Grand Jury subpoena in relation to anti-police organizing in the pacific northwest and the May Day spree of 2012 in Seattle. Steve talks about the choice he made, the circumstances that allowed him to return, the support he received while abroad and his return to the U.S.

This week’s Sean Swain segment is read by a supporter. Sean has resumed his meals but is still being denied phone and email access. It is suggested that you take a minute and give a call to Chief Inspector Gary Mohr in Columbus Ohio at (614)752-1671 or (614)752-1677 and request that Sean be given those accesses so that he can more easily communicate with his new legal counsel, Richard Kerger. Seanswain.org also suggests calling ODRC Legal Services at 614-752-1765 and requesting to speak to Counsel Trevor Clark. Sean believes that Trainwreck Trevor is the source of his silencing.

We also announce a request by the Move9 Parole supporters that people call the Pennsylvania Parole Board from the 5th to the 9th 24/7 at (717) 772-4343 and request that the Board parole Debbie (Sims) Africa (#006307) on the grounds that Debbie has:
1.) received a positive recommendation from both the Warden and Superintendent of her prison for parole;
2.) employment and housing both set up for her if she is paroled
3.) an excellent prison conduct record.
More info can be found at http://move9parole.blogpsot.com
Hear our interview with Orie Lumumba about the Move9 case here: http://thefinalstrawradio.noblogs.org/post/2014/02/27/update-on-the-g20-extraditees-the-move-9-parole-push-02162014/

A great way to support legal fees and such for resisters, including Dennison Williams and Kerry Cunneen who are still in exile, as they evaded the Grand Jury AFTER being served with subpoenas, and make your walls pretty, check out http://pnwgjresistance.storenvy.com/ or http://nopoliticalrepression.wordpress.com/ and specify donations for Dennison and Kerry. Hopefully money will get to them.

Also, Steve wanted me to include info about his buddy, Amelie, who is caught up in the 5E3 prisoners in Mexico: http://fuegoalascarceles.wordpress.com/in-english-information/