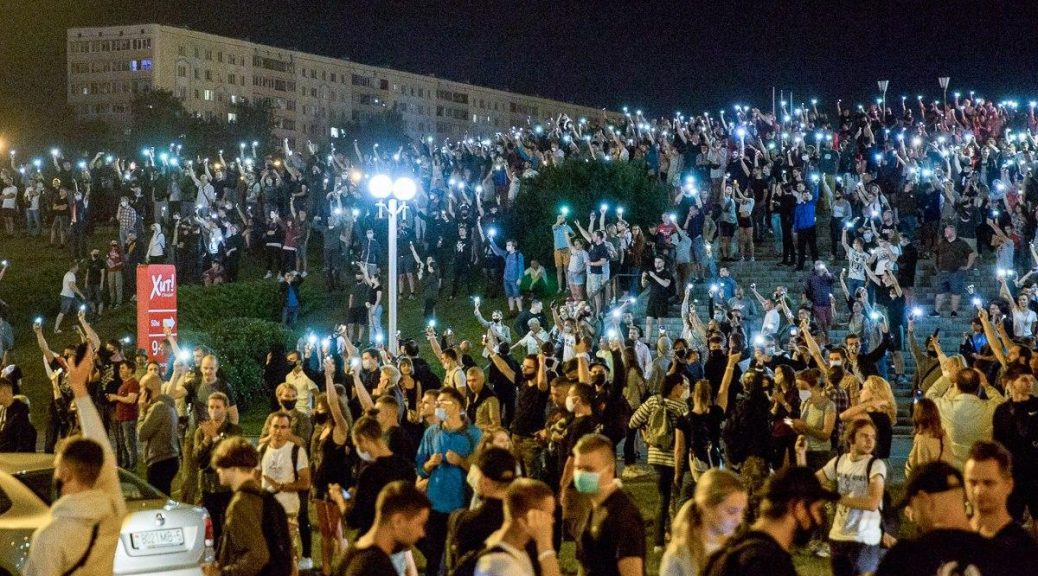 The Uprising in Belarus

Belarus is continuing to experience a revolt against the 26 year dictatorship of the post-Soviet dictator, Alexander Lukashenko. The situation came to a boil, fueled by yet another election rife with administration corruption, the creation of mutual aid infrastructure in the face of a government that abandoned public health measures in the face of the corona virus pandemic, decreased economic quality of life… people found each other and the state turned on them. In response to the police violence, regular folks came out into the streets to oppose the dictatorship and the system threatened collapse. Sounds familiar, doesn’t it?

For the hour, we speak with Ivan, a Belarusian anarchist living in Germany, about the uprising, doxing cops, the part that anarchists have played, the distinctions between pro-Democracy and anti-dictatorship activity, the upcoming week of solidarity with anarchist and anti-fascists of Belarus from November 23-30th, 2020 and how comrades from abroad can support not only those repressed but the activist efforts to sustain the resistance to the Belarusian dictatorship. You can learn more about the week of solidarity, including where to send solidarity funds and communiques at ABC-Belarus.Org. You can support wider protest infrastructure by donating at FireFund.Net/Belarus.

A great news source that Ivan mentions to keep up on anarchist perspectives from Belarus (sometimes in English) is: Pramen.io/EN/Main/

Ivan also mentions, when talking about international solidarity, US corporations that are supporting the Belarusian dictatorship during this repression. They include:

Black liberation fighter Russell “Maroon” Shoatz has tested positive for COVID-19. Maroon, a former member of the Black Panther Party and the Black Liberation Army, is a political prisoner/prisoner of war held by the state of Pennsylvania. Maroon has been imprisoned since 1972, when he was given a life sentence for an attack on a police station, He was held in solitary confinement from 1991 to 2014, when he was allowed to return to the general population.

Maroon is already being treated for stage-four cancer and is forced to live in inhumane prison conditions. Given his positive COVID-19 diagnosis and his already compromised health, we demand his immediate release and the release of all elderly prisoners.

From a Facebook post on the page of Russell Shoatz III: Maroon “is a political prisoner enslaved for his efforts to liberate our people. He is the father of my dear friend, Russell Shoatz III. In addition to Covid-19, Maroon is also suffering from stage 4 colon cancer. He is living in tremendous pain, in unhygienic conditions where 30 inmates are being held in one room sharing one toilet. It is a violation of their human rights and Maroon’s agreement with the state. Maroon is asking that all supporters call the office of Pennsylvania Governor Tom Wolf and demand his immediate, unconditional release, as well as that of ALL elderly prisoners infected with COVID-19. Please call (717) 787-2500 beginning the morning of Monday, November 16, and keep the pressure on!”

More, including a call script, at https://kersplebedeb.com/posts/urgent-take-action-for-russell-maroon-shoatz/

Anarchist and Anonymous hacker, Jeremy Hammond has been released to a half-way house in his hometown of Chicago after over 10 years in prison, resisting a grand jury alongside Chelsae Manning and two bouts with Covid-19. Welcome home, Jeremy! Not sure when their next episode is due out, but Jeremy and his brother Jason both produce a podcast called “Twin Trouble”, a member of the Channel Zero Network and you can hear an interview that we did with Jeremy for June 11th this year.