“We are prepared, motherf**kers!”: Greek anarchists on New Democracy regime

This week, we’re sharing a conversation that I had with comrades from Radiozones Of Subversive Expression, an anti-authoritarian pirate radio station based in Athens, Greece. Mike, Sprout and Omar, three anarchists working with ROSE share their perspectives on the change in government in Greece, corruption in the New Democracy party that just came back into power, it’s attacks on immigrants and the anarchist stronghold neighborhood of Exarchia, the status of the social movements of the left and more. You can listen to their streaming radio station with ALL sorts of programming, from live reports from street actions, to comedy shows to music, all up at radio98fm.org. Check our past interview with folks from ROSE. ROSE is, notably, another member of the A-Radio Network to which we belong, which produces the monthly English-language anarchist news show, B(A)D News: Angry Voices From Around The World.

Other informative interviews conducted by fellow members of the Channel Zero Network on this topic include recent episodes by IGDcast and The Ex-Worker.

But first, Comrade Malik Washington could use some help. He’s a politicized anarchist prisoner affiliated with the New Afrikan Black Panther Party who’s been serving time in Texas and been vocal about the mistreatment of himself and other prisoners. Despite his activism on the inside, Malik was recently paroled into Federal custody from Texas state control, and is being held currently at USP Beaumont. It was common knowledge among prisoners that he was in danger at Beaumont because of his activism, and Malik was attacked and is now in solitary. There is a phone zap ongoing to pressure administration to release him from solitary and move him to a federal prison in California, where he can be paroled after his brief stint in the DOJ’s gulags, and Comrade Malik can start working more actively with the SF Bay View National Black Newspaper where he has a spot upon his release. To learn more about his case and details on calling Warden Larry Schultz at USP Beaumont up at comrademalik.com.

Welcome to the 25th edition of Bad News. This is your Angry Voices From Around The World for August, 2019.
If you’d like to get involved in the network or want to hear more – send an email to a-radio-network@riseup.net.
Check out all the shows look for the a-radio-network collection on archive.org or at our website, a-radio-network.org
On this month’s show we have:

This 23rd edition of BAD News, Angry Voices From Around The World for June, 2019.

If you’d like to get involved in the network or want to hear more – send an email to a-radio-network@riseup.net.
Check out all the shows look for the A-Radio Network collection on archive.org or at our website, a-radio-network.org
On this month’s show we have:
* Radio 98fm in Athens, voices of subversive expression, with a round-up of news and information of interest from Greece.
* Dissident Island Radio, from London, UK, with a round-up of anarchist actions and news
* The Final Straw Radio, from southern Appalachia, with an update about nazi and police collaboration in harassment of anti-racists in the so-called US south.
(Total length: 23 mins 10 seconds) 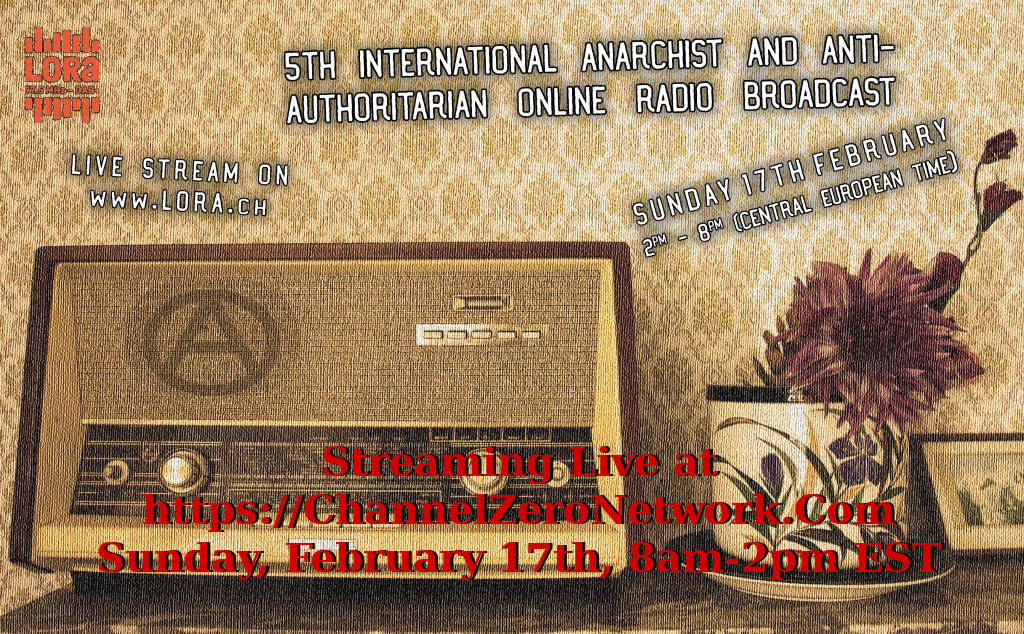 Welcome to the 19th edition of B(A)D news: angry voices from around the world a commonly produced monthly show of the anarchist and anti-authoritarian radio network, on this occasion composed by Črna Luknja, anarchist show on Radio Student from Slovenia.

– Radio zones of Subversive Expression from Athens:
On 17th of December, a powerful explosion damaged the Skai broadcaster’s facilities in southern Athens. The “Group of Popular Fighters” – OLA in greek assumed responsibility – declaration on athens.indymedia.org

– Final Straw from USA:
This month, The Final Straw Radio shares part of an interview with Delee Nikal, a Wet’suwet’en community member from the Gidimt’en clan and the Cas Yikh House, a First Nation in so-called British Columbia, Canada. On December 14th, 2018, the Canadian Supreme Court pushed through an injunction on behalf of Coastal GasLink (owned by TransCanada) threatening the Wet’suwet’en community defending its land of the Unist’ot’en clan with police invasion and extending it to land defenders at Gidimt’en Camp. Gidimt’en camp was invaded by Royal Canadian Mounted Police on January 7th, although the Unist’ot’en Camp stands. More information can be found at https://unistotencamp.com, https://wetsuweten.com and keep up by following https://sub.media. To hear our original interview, visit our website.

– Črna Luknja, Slovenia:
In Serbia people express their dissatisfaction with the government on the streets of Belgrade and other cities for more than one month. We manage to make interview about the situation – why heave the protests started, who are the protagonists, is there a potential for anarchist involvement – with comrade from Anarcho-syndicalist initiative (ASI) in Serbia.

The show is divided with some music and a poetry break in between.

This month on B(A)DNews: Angry Voices From Around The World, participants in the A-Radio Network provide you with the news & views from our homes for the month of October, 2018.

You can hear the audio by clicking this link to the mp3 or you can play or download the audio directly from Archive.Org here alongside the English-language transcript (linked soon).