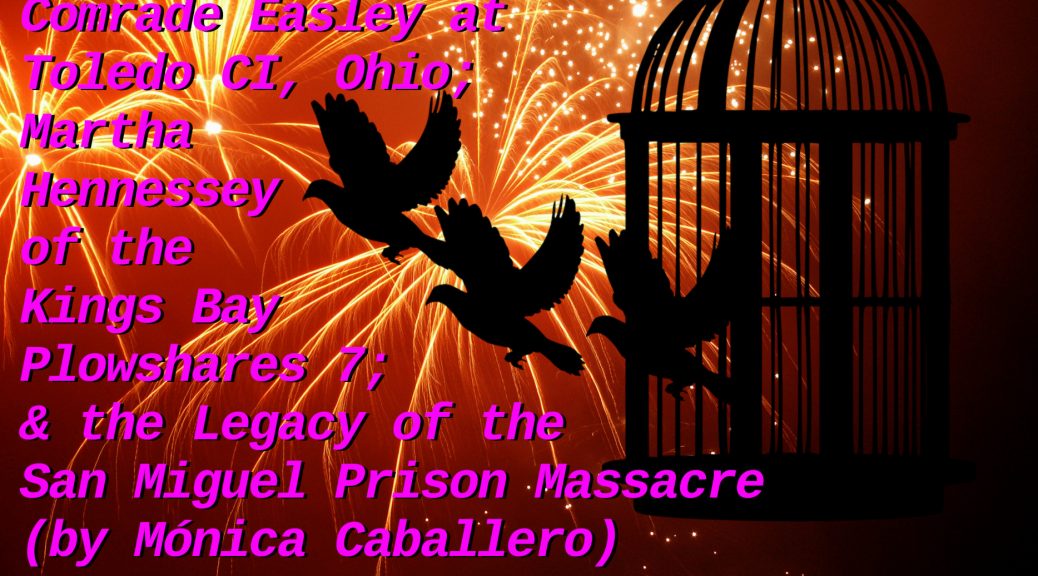 This week, we’re presenting three segments, all related in some way to prison. We hear an essay by an anarchist prisoner in Chile about a prison massacre on it’s 10th anniversary, the voice of David Easley reporting from within a covid outbreak in an Ohio prison, and the voice of someone who’s protest against nuclear weapons was leading her to incarceration.

And Sean Swain. If you want to cast a vote for one of his nicknames, you can send an email to us at TheFinalStrawRadio(at ) riseup( dot) net, with ‘Nickname’ in the subject header until January 10th.

First up, Comrade David Easley at Toledo Correctional Institution in Ohio talks about the covid-19 outbreak there, which he is still recovering from, that has knocked out one in five guards and forced the state to bring in National Guard to act as screws at the prison. The administration hasn’t been proactively testing prisoners and so doesn’t have data on infections besides symptomatic cases. When prisoners have tested positive, the only treatments they get are non-asprin Tylenol and cough drops, unless their health degrades to the point of getting onto a ventilator.

David also talks about his inside/outside abolitionist study group he’s been working with over instagram. Comrade Easley is seeking outside supporters to help run the Abolition Study Group instagram and also his personal social media so he can report to the outside world on the conditions in Toledo CI. He is also seeking lawyers in Ohio that can help sue the ODRC on behalf of prisoners for the negligence and harm that has led to so much sickness and death, inside and outside of the barbed wire. You can reach him via mail at:

and you can email him by creating an account on jpay.com and reaching out to him by his facility and number, David Easley A306400 at Ohio Department of Rehabilitation and Corrections.

Next up, Tali Moon from the occupied land in the PNW of the so-called US shares with us a conversation of Martha Hennessy of the Kings Bay Plowshares 7, 7 white, Catholic anti-militarism activists who just went to prison for trespassing and symbolic damage to Trident nuclear missiles at a military base in Georgia. Hennessy, aged 62, is an anarchist and the grandaughter of the founder of the Catholic Worker movement, Dorothy Day. You can find out more about the Martha and others from her case at KingsBayPlowshares7.Org. You can write to Martha at:

Finally, you’ll hear a segment from the December episode of Bad News: Angry Voices from Around The World from the A-Radio Network, magnificently produced this month by Crna Luknja in Ljublana, Slovenia. The Anarchist Assembly of Valparaiso (so-called Chile) presents a text about the 10 year anniversary of the massacre of 81 prisoners at the San Miguel Prison in Santiago de Chile written by anarchist prisoner Mónica Caballero. This was but a small portion of the audio in this months’ episode.

Comrades from Feral Crust collective in the province of Davao in the Philippines (aka Maharlika) are requesting monetary support to purchase a minicab or small truck to help transport people and materials to their land project in the forests of Marilog in Davao where they are working on implementing ideas and practices related to permaculture, rewilding and nature restoration/conservation. The project has a fedbook page and you can hear an interview from July of 2015 that we conducted with folks from FC.

Surgeries for Activist Returning from Syria

There is also a fundraiser for surgeries for Autumn, a transgender comrade from the US who volunteered in Syria, and suffered injuries during the civil war while doing solidarity work there. They are trying to raise $10k.