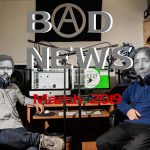 This week we feature two interviews in the show

First, we spoke with Kamau Franklin, who is a radical activist, the political editor for the online publication Atlanta Blackstar, and former attourney based out of Atlanta, GA. We are speaking today about Ungovernable, which is a radical organizing platform rooted in anti state Black and POC autonomy, how it began, its directives and ideals, and how to best move forward in this political moment among many other things.

To learn more about Ungovernable, you can visit their website at https://www.ungovernable2017.com/, also you can hit them up on fedbook by searching “Ungovernable 2017 and Beyond”, our guest has also invited people to message him on the FB too, you can do that by searching his name spelled Kamau Franklin.

The second segment is an interview conducted by audio comrades from the Slovenian anarchist radio project called Crna Luknja with a member of the Turkish anarchist group DAF & an editor of their newspaper, Meydan.
As we announced recently on the show, the main editor of Meydan, Hüseyin Civan, has just been sentenced to 15 months in prison in relation to 3 articles in their December 2015 issue dealing with the struggles of Kurdish minorities and the resistance they offer to the Turkish state’s slow genocide.

The conversation was published on January 5th of 2017. Though most of Crna Luknja’s interviews are conducted in Slovenian, they do produce interviews in English when it’s the common language shared with their guests. More content from Crna Luknja can be found here

Sean Swain, an anarchist prisoner who’s generally got a featured segment on this show and has for 3 years as of this week, has been on hunger strike at Warren Correctional Institution in Ohio since December 26th and has been placed in a suicide cell.

Although details are still murky, we know that Sean has been without food since December 26th. He was charged with extortion of a deputy warden and had begun a disciplinary process when he began his hunger strike and was placed in a suicide cell.

We know that the prison is recognizing his hunger strike and following the associated procedures, which include taking him to the medical unit every day and weighing him and taking his vital signs. It is unclear whether they are attempting to negotiate with him in any way.

Please take a moment to write a letter of encouragement to Sean and to call the following prison administrators and encourage them to negotiate with Sean and help him end this hunger strike as quickly as possible.

Updates on Sean can be found at http://seanswain.org

There are pushes by the support crews in these last days of the Obama presidency to request clemency or commutations for the sentences of long standing political prisoners here in the U.S. The few that we’ve caught wind of specifically are the following:

Leonard Peltier, an indigenous activist and prisoner in his 70’s is continuing to serve in federal prison as his health declines despite his denial of guilt in the shooting death of 2 fbi agents during the raid on the American Indian Movement’s encampment on the Pine Ridge Reservation in North Dakota in 1975. The case has been hotly debated since it was held, with many contesting the possibility of Peltier’s guilt. Recently, one of his prosecutors from that case said that it was time to let him go due to his age and health. More on his case can be found at http://whoisleonardpeltier.info
Reach out to US AG:
The Honorable Loretta Lynch
Attorney General
U.S. Department of Justice
Comment Line: +1 202 353 1555
Contact form: https://www.justice.gov/doj/webform/your-message-department-justice

Chelsea Manning is a former intel analyst for the U.S. Military who was convicted of sharing documentation of military abuses with Wikileaks and is serving a 35 year sentence. She is also a Trans Woman who transitioned inside of military prison and because of her poor treatment on the inside has been very depressed and attempted suicide. There is hope that in his last days, Obama may commute her sentence for trying to do the right thing and to protect against the increased cruelty of the upcoming regime. Visit chelseamanning.org for details on how to support her

Here, we present both parts one and two of an interview with Merve Arkun, Hüseyin & Özgür, members of Devrimci Anarşist Faaliyet, or DAF. DAF translates to Revolutionist Anarchist Action and is a network of overlapping collectives in Turkey. They are based out of Istanbul and run an office and two cafe’s, both called 26A, which is a meeting space and employer for collective members. This conversation was conducted on March 19, 2016, a few short hours after a DAESH (ISIS) bombing occurred in the Beyoğlu neighborhood of Istanbul, on the touristy street called İstiklal Avenue, just a few blocks from one of the collective’s cafe’s and their newspaper office.

The bomb killed 5 people (4 tourists plus the bomber), and injured some 36 more. The tension in the city in the days before the bombing was palpable as trucks of riot police roved around the neighborhood, and embassies and foreign schools closed for security reasons. The approaching Newroz celebrations, or Kurdish New Years, were slated to take place a mere 2 days after this attack in the contentious Taksim Gezi Park so recently after the resumption of military and legal hostilities between Kurdish groups and aligned leftists and the Turkish government headed by the AK Party of President Recep Tayyip Erdoğan. This decision most certainly would promise demonstrations and conflict
between security forces and civil society around the right to the contentious park, and against the war on the Kurds both in Syria and Turkey by Erdoğan’s government.

Besides the 26A cafes, DAF includes an Anarchist Women’s collective, a publishing project in the form of the Meydan Gazette (published monthly in paper form), and a youth collective, the Lycee (or High School) Anarchist Federation called LAF. In addition it organizes arts events and projects, and participates in labor organizing and solidarity with Kurdish resistance and the Rojava Revolution. DAF also organizes in tandem though autonomously with anti-militarist and anti-conscription activists in Turkey.

Throughout this first hour: Merve, Hüseyin & Özgür talk about the collectivized economic and living structures of DAF and how that pans out to support collective members and build collectivized models for survival within and against capitalism.

In the second podcast episode, the interviewees discuss: PATIKA Ecological Collective and their publication, organizing with communities in the Black Sea region against a hydro-electric dam, and more; Merve’s work with the Conscientious Objector Association against militarism and conscription; Meydan Gazette and their other publication projects; the modern anarchist movement in Turkey since 1989; solidarity with Kurdish populations in Turkey; organizing material support for the Rojava Revolution and aiding in helping anarchists join the struggle there; and more. Download Pt 2

To see an article (in Turkish) about Esra Ankan, you can visit the Meydan Gazette’s article here:
http://meydangazetesi.org/gundem/2016/02/trans-tutsak-esrayla-dayanismaya/

Vigil for The Pulse Shooting

******A quick announcement: There will be a vigil tonight at 9pm at Firestorm Books and Coffee at 601 Haywood Rd in West Asheville for the victims and community affected by the shooting that occurred last night in Orlando, Florida. The shooting occurred at the Gay dance club called The Pulse and media outlets are announcing that there were 50 people killed in what appears to have been a targeted attack by someone from outside of the area wielding an assault rifle and a handgun. The hostage situation that developed was ended by a SWAT invasion at 5AM this morning (6-12-1016). Come out tonight and support this community.******

Sean Swain speaks about a comrade of his in his facility, a trans woman who was put away for defending herself against an assaulter. Her government name is Adam Bockerstette, and while she can receive mail

under her chosen name (which is Kara), we were unsure about how to spell that. So if you do choose to write to her, your letters can be addressed to Kara Bockerstette, but note that your envelopes should be addressed to:

Also keep an eye peeled at http://seanswain.org/ for more updates about Kara and her situation.

Good news for our comrade on the inside, Oso Blanco, who was sentenced to 80 years in maximum security prison for a series of bank robberies and a firearms violation. Oso Blanco is someone of Cherokee descent, and has been politicized during his time in prison and before. Recently there has been a massive fundraising effort on the part of his support team to get him transferred out of his former facility, and for legal fees to get his sentenced reduced. Both of these efforts have been
successful!

Thanks to fundraising efforts and donations, they have reached their fundraising goal at this time. Of course, money will always be needed until Oso Blanco is completely free – donations are always welcome. The support in donations and spreading the word was fast and amazing! Oso Blanco has been assigned a lawyer who he feels comfortable with and he is moving quickly to make sure the motion is filed by June 25th, 2016. Communication with Oso Blanco has been iffy at best. Please write him to
show support. If you donated, write and let him know as it will help immensely to raise his spirits. If you would like to donate further, and for guidelines on what mail will and won’t get into his facility, you can visit his support website at: http://freeosoblanco.blogspot.com/

To write Oso Blanco at his new location, you can address letters to: